On 12th  of March 2020 took place the Second General Assembly of the LIFE Multi-AD 4 AgroSMEs project (LIFE17 ENV/ES/000331) with the participation of all partners of the project (AEMA, I&S, ITAINNOVA, SIS and EGA) at ITAINNOVA’s facilities in Zaragoza (Spain). To this meeting assisted the Executive Agency for SMEs (European Commission) through a NEEMO representant and monitor of the project. The consortium members were announced that Mr. Gorka Garcia, the actual project manager, will leave the project at the end of March and so Mr. José B. Carbajo from AEMA will take over this responsibility.

During the meeting, the work done during the first eighteen months of the project was presented. Also, the technical actions delayed, with the new design and the high amount of simulations needed to get a final design of the reactor were explained by the project coordinator, Gorka García of AEMA.

Regarding the technical parts of the project, the Fluid Dynamic Analysis has been finished and from the results of the simulation an initial design of the demo unit of the anaerobic reactor has been proposed.

In addition, the final design of the reactor, mainly the feeding system and the three-phase reactor, was explained. The place of installation of the demo unit was presented also. The demo reactor will be placed at a winery in La Rioja.

The dissemination and communication activities carried out in the last months, the impact of the website and dissemination materials were also explained during this meeting.

The next steps targeted for the project are:

This project is co-financed by the LIFE program of the European Commission. The LIFE program is the EU’s funding instrument for the environment and climate action created in 1992. 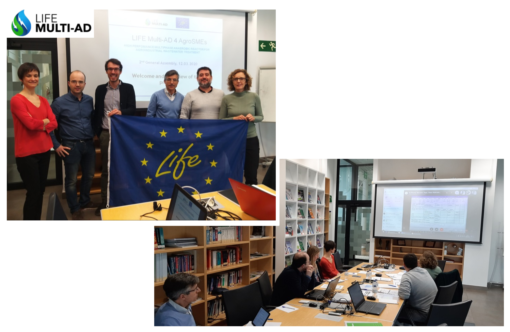 Figure: Partners and Neemo representant during the project meeting.